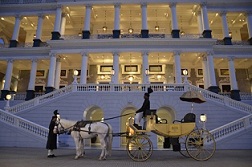 The city of pearls has many gems in its treasure and one of them is Falaknuma Palace. Initially owned by Nawab Sir Vikar ul Umra, Amir e Paigah and now by The Nizam of Hyderabad, the Falaknuma Palace has been given to the Taj Hotels on lease.
The renovation and restoration of the Palace started in 2000 and the renovated palace was finally launched as a hotel managed by Taj Hotels in November 2010.
Nawab Vikar ul Umra who was the then prime minister of Hyderabad; built the palace and named it Falaknuma which means ‘like the sky’ or ‘mirror of the sky'.

History of the Falaknuma Palace

The palace depicting 'the sky' required lot of money for construction, so much so that Sir Vikar ul Umra took loan to complete it. However, Lady Vikar ul Umra intelligently found a solution to this problem and asked Sir Vikar ul Umra to invite Mehboob Ali Pasha Nizam VI to the palace.
During the visit the Nizam VI loved the palace to such an extent that he accepted the offer of Sir Vikar ul Umra and took the palace as a gift.
However he made the gesture of paying all the expenses incurred in building the palace. This is how the Paigah nobel was saved from a financial crisis and the Nizam of Hyderabad took ownership of the palace.

Falaknuma palace hosted many dignitaries and royal guests till 1950, however after 1950 it got lost into oblivion when the Nizam shifted his abode to another palace.
Dr Rajendra Prasad the first President of India became the last guest of this palace in 1951 after which in 2000 the palace was given to Taj hotels for restoration on a 30 year lease. The restoration process was supervised by the princess Asra Jah who is the first wife of the seventh Nizam.

In 1884 on the 3rd day of March Sir Vkar ul Umra Bahadur laid foundation for construction of the palace which was designed by an English architect. The architect took nine years to complete the palace. Sir Vikar ul Umra was then residing in the Gol Bangla and Zanana Mahel where he closely watched the finishing of the Mardana portion.

The design of the palace is inspired from that of a scorpion whose stings are depicted by north wings of the palace. In the middle is the Kitchen, the Gol bangla (modeled after the white house and Buckingham palace), Zanana Mahel and the Harem quarters located in the south of the palace. As the Nawab loved travelling architecture of this palace has a blend of Italian and Tudor architecture.

The state-of-the-art entrance or the reception room has fresco decorated ceiling and has gilded reliefs. Another noticeable piece of art is the ballroom which has a two ton manually operated organ and is considered one the most unique pieces in the world.
The palace still houses priceless treasures, manuscripts and books, furniture, paintings, statues etc. out of these treasures the Jade collection as Falaknuma is quite exclusive and exquisite.
The Library at the palace is worth mentioning as it is a replica of Windsor Castle’s library; this library is known for having one the finest Quran collection in the country;
Living area is on the ground floor and the billiards room had two similar identical tables designed by Burroughs and Watts from Britain, now there is only one table and one has been put in Buckingham palace. 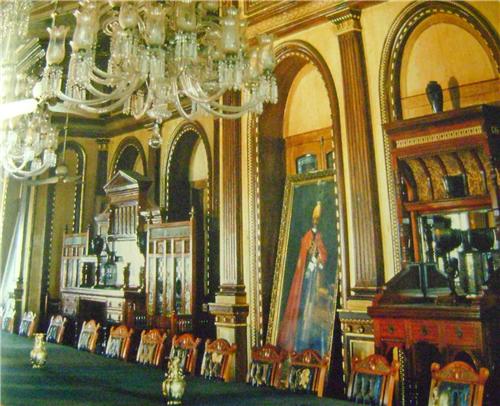 As mentioned before the palace is an eclectic blend of many architectures and styles; one of the interesting pieces of artifact in the palace would be the Venetian chandelier.

What makes it interesting is the fact that it required six long months to refurbish the chandelier as one Osler chandelier has 138 arms and there are about 40 similar Osler chandeliers in the halls of Falaknuma Palace.

In 1884 the telephone and electrical system was introduced in the world by Osler and the palace housed one of the hugest electrical switchboards in India. 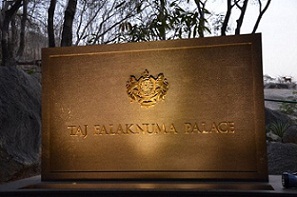 Hyderabad is the emerging silicon valley of India after Bangalore and also attracts tourists because of its rich heritage and historical importance. After the palace was given to Taj hotels on lease for 30 years it got open for visitors and tourists.