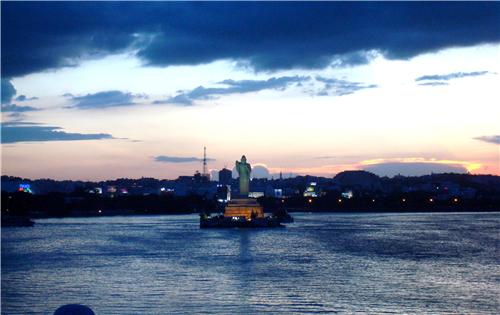 Travelling to a particular city, whether domestic or international becomes all the more convenient, if you are well versed with the geography of that place.
Hyderabad is located in the Deccan Plateau and rises at a height of 1,640ft above the sea level. It spreads over an area of 260 km2. It lies at 17.366o N latitude and 78.476o E longitude.
The area of Hyderabad mainly has a rocky and hilly terrain. The city was originally founded on Musi river which starts from Anantagiri Hills that is located 70 km south west of Hyderabad and meets Krishna River near Wazirabad in Nalgonda district.
Hyderabad is the fifth largest city of India and along with its twin sister Secunderbad and other suburbs it extends upto 16 miles.

The climate of Hyderabad has a unique combination of both tropical wet and dry climate. The city remains fairly warm through most parts of the year and do not receive much rainfall in the monsoon.
Hyderabad city becomes cool in and around the month of December and January when temperatures marginally come down, along with the start of winters in North and central parts of India. The temperature during summer goes as high as 42 degree Celsius whereas in the winter it drops low to 12 degree Celsius.

Almost 75 percent of the rainfall is heavy during the month of  June to September, with July being the month when it rains heavily which is also the south-west monsoon season.
The south-west monsoon sets in by the 7th of June. Its advent is sudden and the rainfall increases from less than 5 percent (of the annual) in May to 15 per cent in June.
Humidity is high mostly in the monsoon season where it reaches 75% from July to September, where in it gets comparatively low with an average of 25% to 30% during the months March, April and May.

People and Languages in Hyderabad

When we talk about demography, the population in the city was 3.6 million in 2001. Within few years it grew to 6.3 million in the year 2009.
The rapid rise is mainly because this place has sought to become an IT hub in the nation which leads to the city witnessing unparallelled growth in several industrial sectors.

Though Hyderabad is a state in south-India that is almost an entirely  Telegu speaking population the geographical scattering of the people in Hyderabad varies from place to place, since the state was under the Muslim rule.
There is a majority of the Muslim population primarily in the old city, below the Musi River in Hyderabad. Telegu crowds are mainly in areas like Punjagutta-Kukatpally stretch on the west of the Hussain Sagar, Dilsukhnagar, areas east of the Hussain Sagar, and all the sprawling outskirts.
This city has many immigrants which are scattered  mostly in the more upmarket areas like Banjara Hills, Jubilee Hills, Madhapur and Begumpet, and the neighbourhoods. The people here in this city are cordial, amicable, helpful and culture oriented.