Are you planning to spend a day exploring the city of pearls, Hyderabad?

Well, to be blunt, Hyderabad sightseeing trip in one day is like trying to build Taj Mahal in a day! For an urban centre like Hyderabad, the place might require at least three days as the city has a lot to offer for tourists. Nonetheless, a few travel suggestions and tourist options brought up down below might somehow fulfill your itinerary. All it takes is proper planning and more importantly, how well you are executing your travel plans of one day sightseeing in Hyderabad.

First of all, categorize the tourist attractions in Hyderabad according to your interest or segregate the ones which you are longing to visit. Never miss out a significant or most preferred tourist attraction as by the end of the day while finishing your one day sightseeing in Hyderabad, one should experience the feeling of satisfaction and astonishment the city has offered and not the feeling of incompleteness. At the same time, think twice about your touring motive, whether it should comprise of entertainment spots or religious spots after all the schedule is just about one day.

Tourist Attractions for One Day Sightseeing in Hyderabad

The most effective mode of transportation to explore the city of Hyderabad in one day is a cab/taxi which is available in plenty at important points throughout the city at all times.

Start your day with the visit to the Qutub Sahi tombs near Golconda Fort. The Qutb Shahi Tombs consists of seven Qutub Shahi sultans in the Ibrahim Bagh (garden precinct). These tombs constitute a prominent bunch and place upright on an elevated platform. They are fundamental structures rested on a square foundation fenced by archways, a typical style that combines Hindu and Iranian patterns.

Climbing on the terrace around these tombs will portray the spectacular view of the Golconda fort located in the vicinity. Needless to say, the view from the terrace is a perfect spot for taking pictures. Tourist guides are available in plenty and guide charges usually ranges from Rs. 300 to 500.

Once you are through with the Qutb Shahi tombs, proceed to the Golconda Fort which is located just 3 km away. Golconda Fort, previously a mud fort established by the Kakatiya dynasty during the 13th century. Golconda Fort is considered as one of the most glorious fort complexes across the country. Resting on a mound on one side and majestic fortress on the other side, its emplacement and interior pattern brand it one of the most inviolable fort complexes in India.

Amazed enough by the grandeur of the Golconda Fort! Push the accelerator through Langar House 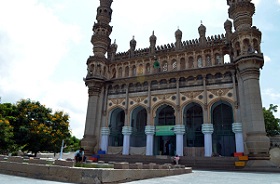 (Langar Houz), to the Old City. On the way, one can find Toli Masjid (Damri Masjid) located at a major suburb of the city, Karwan. The Toli Masjid is 'Indian National Trust for Art and Cultural Heritage' awarded site and an adjudged heritage site by archeological survey of India (ASI).

Proceeding on tour, taking Patthargatti route is going to be a singular experience as the buildings on both sides of the road are constructed using rock.

It will be around afternoon, and the next preferable stop would be the Charminar. This monument is widely used as the landmark of the city of Hyderabad and the state of Andhra Pradesh. The majestic structure of Charminar with four elegant slender towers situated in the old city will amaze the visitors in no time. The monument was actually built by Muhammed Quli Qutb Shah (5th sultan of the Qutb Shahi dynasty of Golkonda) as a commemoration for plague victims.

By the time you finish exploring the Charminar, you must be tired and hungry, and you better find a nice eating house in the locality. Moreover, Hyderabad sightseeing trip will not be complete without tasting the famous hot and spicy Hyderabadi Biryani.

Find below some of the popular restaurants near the Charminar, Hyderabad:
Right after your food, have a casual walk into the Laad Bazar (Choodi Bazaar). The bazar which is just 200 metres away from the Charminar is one of the oldest markets across the region. The Laab Bazar is far-famed for bangles, Qalamkari cotton textiles, Bidriware metal handicrafts, Khara Dupattas (traditional bridal dress of Hyderabad Muslims), gold and silver fancywork on fabrics and many other products. The narrow bazar street is filled with stores that are always crowded and if luck favours, one can even witness bangles being created. 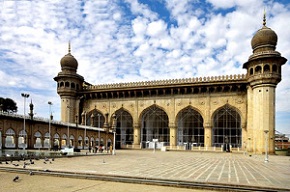 The next stop would be Mecca Masjid, which is located just 400 metres away from the Charminar.

Mecca Masjid, also spelled as Makkah Masjid is considered as one of the largest mosques of the country and a named heritage structure in the old city of Hyderabad.

The primary hall of the Mecca Masjid is big enough to hold 10,000 worshippers at one time. The primary structure of the masjid is organized between two monumental octangular towers completed of an exclusive chip of granite. 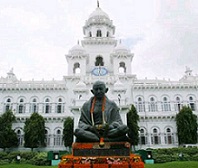 It will be somewhat late by now, believably 6 PM, and you must be exhausted and wanting to go back to the hotel. If you still have some juice in your battery, going for one last drive to the Public Gardens (Bagh-e-Aam) wouldn’t hurt!

By the end of the day, you will be filled by the thought of coming back to this lovely city in the near future.

Find below some of the reputed Tour Operators for Hyderabad: