Located very close to Charminar, Mecca Masjid is one of the biggest and oldest mosques of Hyderabad. Since some bricks were brought from Mecca to built the mosque, it was named after the most holiest place of the Muslims. 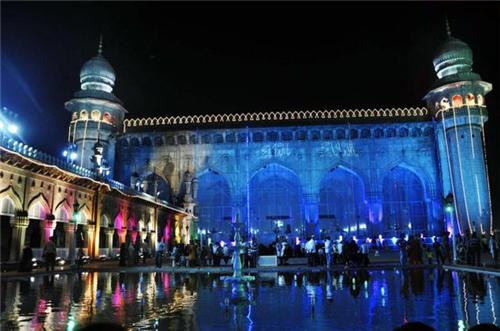 History of Mecca Masjid in Hyderabad

The fifth ruler of Qutub Shah Dynasty, Muhammad Quli Qutub Shah commissioned the importing of soil from the holiest pilgrimage place of Islam, Mecca. This soil was used to make bricks for the construction of the central arch of the mosque in Hyderabad.
Muhammad Quli Qutub Shah planned a city for which the Makkah masjid was supposed to be the centre piece. There are three facades that are arched and have been carved out of the same granite piece. It took a total of five years to quarry this huge piece of granite.
The complete construction of the mosque took 77 years beginning from the time when Muhammad Quli Qutub Shah started the construction till the time when Aurangzeb completed it. This was approximately between 1617 to 1694. Around 8,000 or more workers were recruited during this period to build the Makkah masjid.

Architecture of Mecca Masjid in Hyderabad