Hyderabad  can indeed be a tourist's delight! Yes, from monuments and heritage buildings to gardens and IT Parks, there is so much to see. Then there is also the twin city Secunderabad with its own share of sites.

Well, this is a reference to the Tombs of Hyderabad. Your visit to Hyderabad will be complete only if you peep into the history, life and legends of the Nawabs of Hyderabad. These tombs also have architectural relevance. 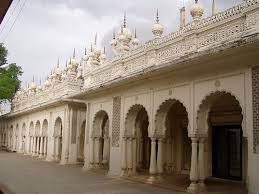 
About Paigah Family of Hyderabad

The word 'Paigah' means foot stool which would mean 'right-hand man' in English language. The founder of Paigah nobility was Abdul Fateh Khan Tegh Jung who worked under the second Nizam Salabat Jang.
His dedicated work led to conferring of hereditary titles on him such as Shams-ul-Doula, Sahams-ul-Mulk and Shams-ul-Umara which literally means 'sun among Nobles or masses'. 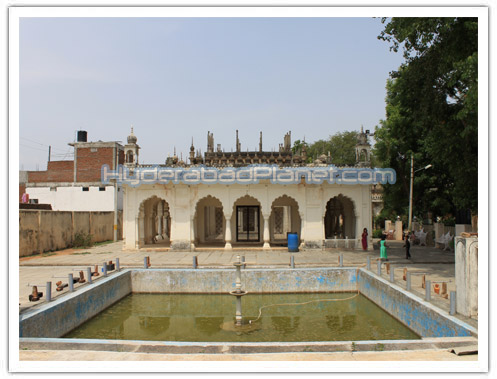 Paigah nobles were close to Nizams and were given the task of managing defense and security of the state. The relationship between them was further strengthened when Fakhruddin Khan, son of Abdul Fateh Khan Tegh Jung, married daughter of second Nizam of Hyderabad in 1797.
After this marriage, many more marriages were solemnized between Fakhruddin Khan's descendants and daughters of Nizams. After the Nizams, it was the Paigahs who were considered powerful.

In the 18th century, the noble families of Paigah were among the highly influential and aristocratic families in Hyderabad.
They are believed to have descended from Hazrath Omar bin Al-Khattab --- the second Calipah of Islam. The Paigah family was extremely rich and enjoyed the right to maintain their own palaces and court, large private armies.

The tombs are beautifully decorated with stucco work. They depict the Moghul, Greek, Persian, Deccani, Rajasthani and Asaf Jahi style of architecture.  The mosaic tilework looks elegant on the tombs. The tombs are enclosed in pierced marble facades.
They depict Indo-Islamic architecture or even Indo-Saracenic architecture, an amalgamation of Asaf Jah and Rajputani style of architecture. The gateway at the entrance is double storied. On the tombs, trellis-work can be seen with floral and varied geometric designs. 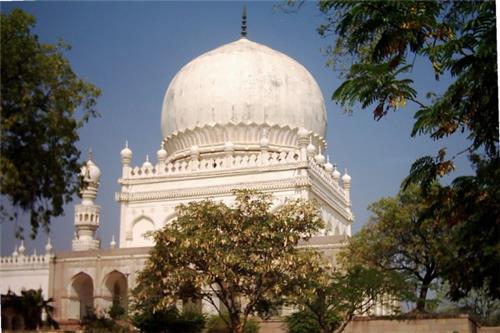 Qutb Shahi Tombs (seven tombs) are located near Golkonda fort. These are tombs of the seven Qutub Shahi rulers. The carved stonework and blue and green tiles on the tombs look very beautiful.
The cluster of dome-like tombs stand on a platform and depict a combination of Persian, Pashtun and Indian form of architecture. These tombs are surrounded by gardens.

In earlier days, there were carpets, chandeliers, canopies here and copies of Quaran were kept on the pedestral. People recited verses from the Quran. To differentiate the tomb of the Sultan from those of other members of the family, golden spires were fitted on these tombs.

The tombs were well managed during the reign of Qutub Shahis but later, they were neglected. However, Sir Salar Jung III aided in restoration of these tombs.  Only the main tomb bears inscriptions in Naskh and Tauq scripts. It refers to Sultan Quli as Bade Malik or Great Master.
It was a custom during that time that the tombs were built during the lifetime of the Sultan! Well, the tomb of Sultan Muhammad Quli Qutub Shah is considered the best and grandest as compared to the other Qutub Shahi tombs. 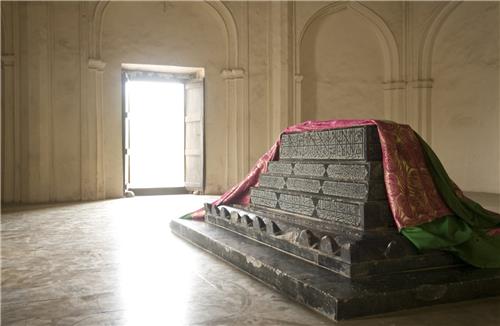 The tomb of Fatima Sultan (sister of Muhammed Qutub Shah) comprises of a bulbous dome very near to the entrance of the tomb-garden. even the physians of Sultan Abdullah - Nizamuddin Ahmed Gilani and Abdul jabbar Gilani which were built in 1651, have found place in this royal place. There are also tombs of two favourite courtesans and a commander-in-chief here.

Towards the West of the tombs, is the dargah of Hazrat  Hussain Shah Wali, a revered Sufi saint. He built the Hussain Sagar in the year 1562.

The garden also comprises of other monuments such as the mortuary bath and, Masjid of Hayat Bakshi Begum. Mir Momin,  the Peshwa (Prime Minister) of Mohammad Quli, detested the closeness between Sultan and Bhagmati and so he ensured that her tomb is not built here. Bhagmati was the wife of Mohammad Quli Qutb Shah.